That Tuesday evening, we had a special visitor to our dojo at the MDC - North Campus. A Japanese judoka, Shinichiro Ikeda (Shodan), from Okayama wanted to practice as part of his vacation in South Florida. He found Jack's dojo at MDC through the Internet and decided to practice because of the Judo lineage from which Jack Williams (Sichidan) decended. He saw that Jack was instructed by Paul Takeshita (Yodan), and that Takeshita's sensei was Isogai Hajime, one of the original Judans of Judo.

Such a close instructional relation to one of the Masters of Judo is what impressed Ikeda. Coupled with this "Judo lineage" was Jack's vast experience in Judo as practioner, competitor, sensei, and coach. So, Ikeda and Jack's students were going to have a great experience.

Like many other Japanese judoka, Ikeda's favorite technique is Uchimata. His Uchimata was effortless with polished technique. Additionally, the speed at which he could execute his technique was very typical of Japanese Judo. A nearly perfect circle could be drawn around him as he threw — a sign of good technique.

Ikeda had plenty of opportunity to successfully demonstrate his technique during randori and uchikomi. After a couple of rounds of randori, Ikeda took the time to give a detailed and personalized instructional on the proper execution of Uchimata.

Each student found out something new to help them improve their own Uchimata and overcome bad habits. He went over every portion of Uchimata from proper gripping and footwork to distancing and body positioning. It was a very helpful and enlightening experience.

After the instructional and some uchikomi, it was time for a couple more rounds of randori with Ikeda. His simple yet effective gripping and swift movements allowed him to execute the throw he had just taught many times. It was a great view into Japanese-quality Judo. 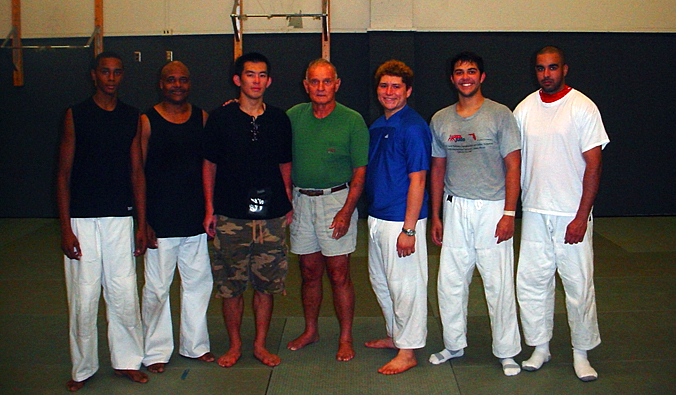 Shinichiro Ikeda, 3rd from left, poses for a photo after a good practice.